Three-and-a-half years ago, three of us here at Hugecalf Studios began working on an epic car-golf game. Since then, our team has grown a little (we’re now 12 strong!) and our game has grown a lot, evolving into an ambitious, ever-expanding, community-centric action racer. That game is Turbo Golf Racing, and I’m delighted to confirm that it’s out now via Xbox Game Pass and Xbox Game Preview.

If you haven’t yet experienced Turbo Golf Racing, it’s a fast-paced arcade-style sports game for up to eight players online, where players race down – or flip and glide over – twisting golf courses teeming with jumps and boost pads. The objective? To putt their ball ahead of their opponents. We like to call Turbo Golf Racing a casually-competitive multiplayer game, which means it’s both welcoming and also embraces the chaos each race can bring.

As part of the Xbox Game Preview program, we will be working closely with the community and all our players to make regular adjustments to Turbo Golf Racing. Thanks to the help of Xbox Insiders who participated in two beta windows, we’ve already undergone rigorous testing. Our second beta alone saw players strike over 11.5 million balls and fire more than one million missiles, and we made numerous changes from the feedback we received to make Turbo Golf Racing the best it can possibly be from Day One.

When you jump into Turbo Golf Racing today you’ll discover online Grand Prix-style races, a Solo Time Trial mode set across 30 sprawling levels, 11 gameplay-altering power cores to give your car powers such as ball-magnets, and over 100 cosmetics to unlock so you can craft a car and ball that’s unique to you. But that’s just the beginning…

While we’ve a fairway to go on our Game Preview journey, I can now reveal that across August, September, and October players will receive additional free updates to add brand new courses, cars, power cores, cosmetics, and even more. We’ll be sharing more details about each of these updates in the weeks ahead.

Right now, though, the greens await. Hold that boost button, keep your eyes peeled for shortcuts, and most of all: have fun! Please tell us what you think and what you want from Turbo Golf Racing’s future over on our Discord channel. We cannot wait to challenge you online and see how all our players will help steer Turbo Golf Racing’s development in the years ahead. 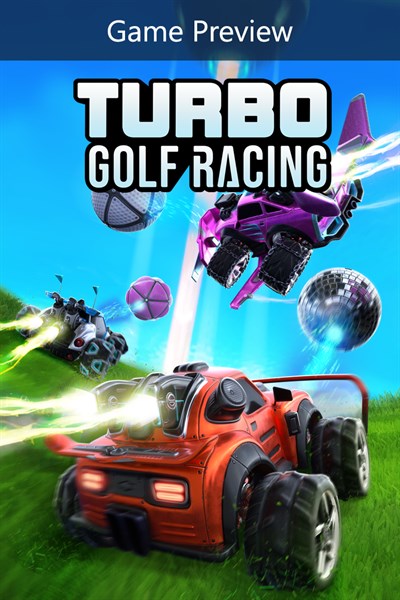 ☆☆☆☆☆ 9
★★★★★
$17.99
Get it now
PC Game Pass
Xbox Game Pass
Free Trial
This game is a work in progress. It may or may not change over time or release as a final product. Purchase only if you are comfortable with the current state of the unfinished game. Turbo Golf Racing is a fast, arcade-style sports game. Drive Turbo powered cars to chip, putt and smash your giant ball in a thrilling dash to beat your friends to the finish flag. RACE YOUR RIVALS TO THE FINISH
Welcome to the future of motorsports. Feel the excitement of fast-paced arcade-style racing as you tee off with your friends in a new exhilarating way. Jump, flip, glide boost and dash with supercharged cars and be the first to get your ball in the hole. 8 PLAYERS ONLINE
Race with up to eight competitors in a Grand-Prix style competition. Hit the boost pads to charge past your rivals, take secret tunnels to outwit them or fire missiles to stop them in their tracks. POWER CORES
Get the edge over your rivals by unlocking and equipping Power Cores. Hit your ball further, fly faster or use unique abilities such as ground stomp, gravitate ball and roll. With a wide variety of Power Cores, find your meta to outwit your friends. TURBO CHARGE YOUR CUSTOMISATION
Choose the car and ball that makes you stand out from the crowd. Enjoy endless paint options, change your wheels, spoiler, shield car body and boosters. TAKE TO THE SKIES
The sky is the limit when your cars have wings. Launch your Turbo powered car into the air and fly past the competition. Fly through tunnels, glide over fans and chase your ball through the terrain and over obstacles. TACKLE THE TERRAIN
Use the terrain to your advantage, fly over the boost pads, and down the fairway. Avoid the rough and the sand traps. Bend your shots around trees and through canyons. Race to the green. EVER-GROWING CONTENT
Unlock cosmetics as you level-up and enjoy an ever-growing game with free regular updates that will bring new courses, new power cores and new cosmetics items to play with. Full details on the latest status of the game, how you can give feedback and report issues can be found at [https://turbogolf.racing/].