Launched in 1982 and remaining in use for exactly 30 years, it was far ahead of its time. Anyone who wanted a terminal to connect to Minitel could get one for free from what became France Télécom, and this led to 9 million sets being installed in homes by 1999. But since Minitel closed, many have ended up being sold. “It’s easy to find a terminal on sale for below €10,” says French maker Gautier Serodon. 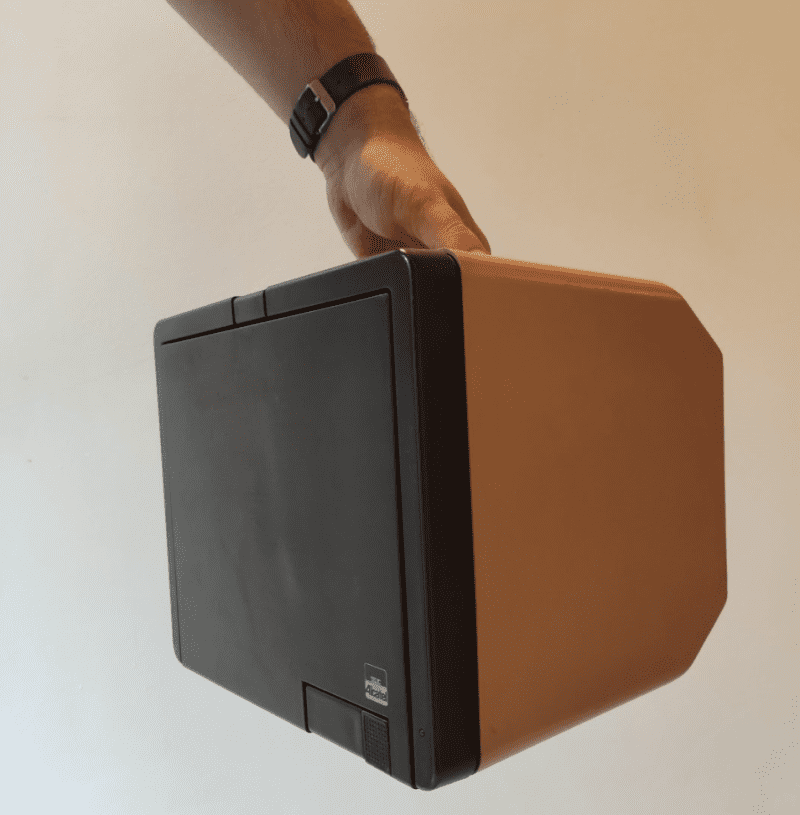 Having snapped one up himself at a garage sale, the 25-year-old decided to bring it back to life. “I love retro tech and I wanted to revive my Minitel with today’s technology,” he says. He decided a Raspberry Pi 3B computer would enable him to do just that. “It’s affordable, compact, and internet-compatible,” he explains. And the plan? To convert it into a battery-powered laptop so he could take notes during his engineering school classes.

Gautier bagged himself a Minitel 1B terminal, made in 1982 by Telic Alcatel. He stripped it of most of its parts, including the CRT display, but decided he wanted to at least retain use of the terminal’s original – and satisfyingly clicky – AZERTY keyboard.

He also kept the power button and power indicator. “I wanted to keep as much of this charming old technology as possible,” he tells us. “The power button and the LED played an important role in maintaining the aesthetics of the Minitel.” 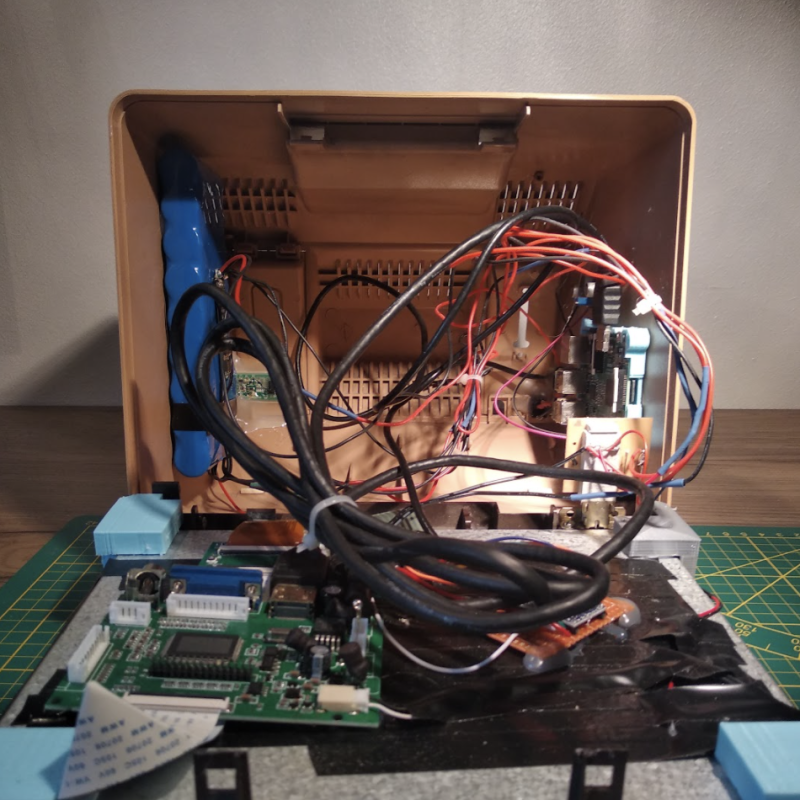 The screen was replaced by a 10.4-inch LCD panel which came complete with a driver board and this was fixed within the Minitel casing using four 3D-printed parts, one for each corner. The biggest challenge, however, involved retrofitting the old Minitel keyboard so that it would simulate a USB HID keyboard that Raspberry Pi could work with.

“The Minitel keyboard is a matrix with a 17-wire output cable,” Gautier explains. “When you retrofit a matrix keyboard, the goal is to find the wires of the columns and the wires of the rows – in this case, there are eight rows and eight columns, making a keyboard with a maximum of 64 keys.”

Gautier used an Arduino Pro Micro which has an ATmega32U4 microcontroller on board. “This is the easiest way to emulate a keyboard,” he says. “Other boards such as the Arduino Nano don’t have the same microcontroller, so it’s way more difficult to simulate a keyboard without modifying the bootloader and other things.” 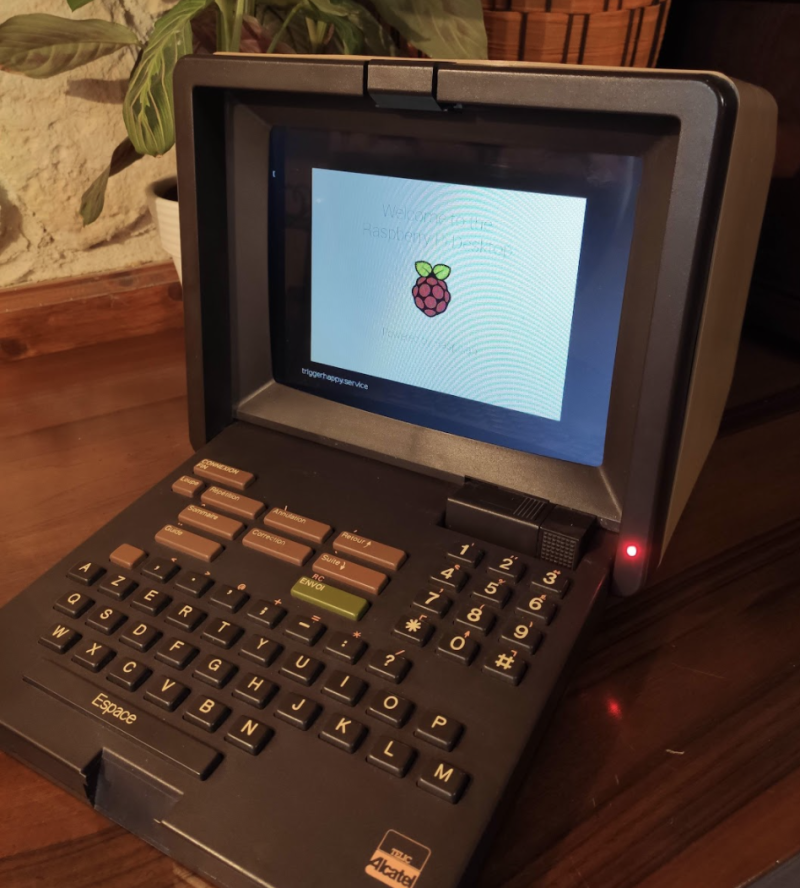 From this point, the main work involved fixing a Raspberry Pi in place and connecting it to the keyboard, a DC step-down converter, and the power switch. “I placed Raspberry Pi right behind the Minitel’s hatch [located behind the screen] so that it is easy to plug in a dongle for a wireless mouse,” Gautier says. “It’s possible to plug an Ethernet cable directly into Raspberry Pi too.”

All in all, it makes for a very neat setup, one that is powered by a 12 V Li-ion rechargeable battery for portability. Gautier doesn’t attempt to emulate the UI of an old Minitel system – “I’m simply running Raspberry Pi OS,” he says – but it still gives a flavour of what it was like to use the system. “It’s just a shame I never had the chance to use a Minitel for its original applications,” he laments. 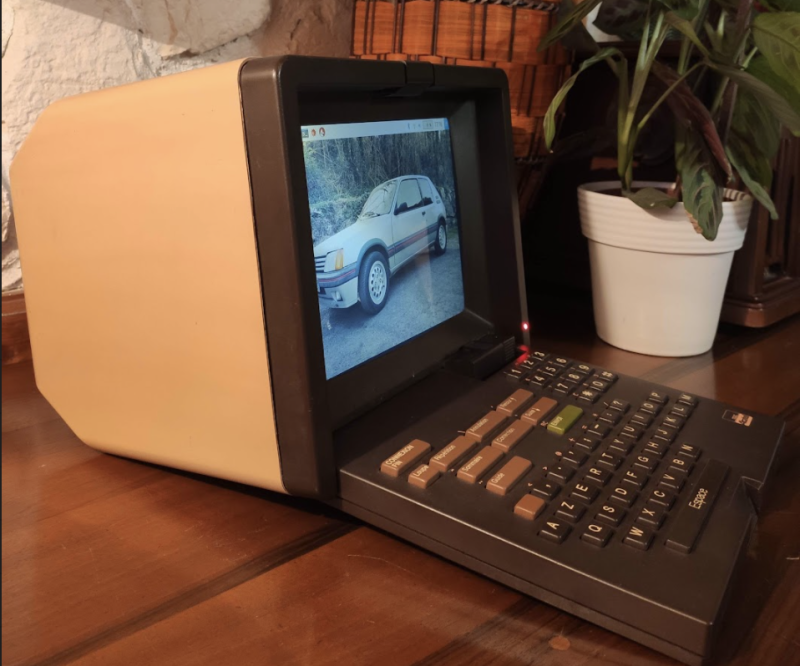