Exploring the World of Thra in The Dark Crystal: Age of Resistance Tactics, Available Now on Xbox | Blogdot.tv

The Dark Crystal: Age of Resistance Tactics is now available for purchase on the Microsoft Store!

The world of Thra was first introduced in Jim Henson’s
groundbreaking 1982 movie, “The Dark
Crystal,” and was the backdrop of the critcally-acclaimed Netflix
Original Series, “The Dark Crystal:
Age of Resistance.” In The Dark
Crystal: Age of Resistance Tactics (DC: AoR Tactics), each of Thra’s
environments introduces unique game mechanics to consider in your strategy.

To build your team, you’ll recruit heroes from the
seven Gelfling clans spread across Thra. BonusXP’s designers incorporated the
unique features of each Gelfling homeland into the tactical encounters set
within each biome. These features may act as hazards to the unprepared, but
also can be used as advantages.

The Vapran citadel in the northern mountains is home to one of our heroes, the bookish Brea, and artisans of many types. Players can find tomes, potions, and other useful items in the battles set in this region.  Characters claiming these items during a mission can heal wounds or temporarily boost Stats and abilities.

The dark and maze-like caves of Deet’s home are illuminated by glow moss along the walls and colorful glowing runes on the cavern floors. The runes are Stat boosters. Both allies and enemies can take advantage of Attack, Magic Power, or Evasion buffs when they’re standing on a rune.

Our third hero, Rian, makes his home in the forest. Unfortunately, so do the Gobbles! This dangerous giant creature lives below the forest and often breaks through the ground. While characters can move through the pit of undulating snapping stalks, remaining in the Gobbles will immediately deal massive amounts of damage. Tread carefully!

The terrain in DC: AoR Tactics has multiple levels of verticality. As you might expect, several abilities take advantage of higher elevation, but many missions on the Sifa Coast make elevation even more important. Rising and ebbing tides make water levels rise and drop, which in turn makes less or more navigable terrain available. It’s quite rewarding to trap an opponent on a lower elevation when the tide is about to come in.

The Crystal Desert is hard to navigate, in part due to the dangerous sandstorms that blow through the area. These sandstorms take their own turn during missions, catching allies and enemies alike and pushing them across the terrain. Elevation can help or hinder the effects, depending on where you stand.

The swamps are home to the Drenchen Gelfling. Higher elevations are important here as the lowest terrain areas are filled with poisonous swamp water. Swamp water won’t affect anyone passing through it, but it will poison anyone who remains standing in it at the end of their turn. Poison damage persists even after leaving the swamp water, so avoid standing in or getting pushed into it.

The tall grass in the Spriton Plains prevents characters standing in it from being targeted by ranged abilities. This can be a blessing against arrow-shooting enemies but trying to hide there isn’t always the wisest action if you’re low on health—most healing abilities are ranged abilities. 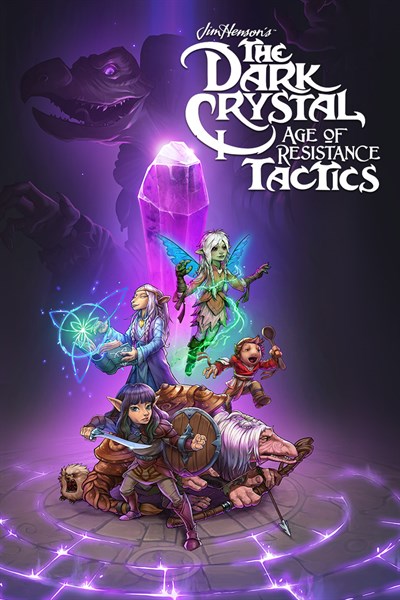 ☆☆☆☆☆ 5
★★★★★
$19.99
Get it now
In The Dark Crystal: Age of Resistance Tactics, you will lead a fledgling resistance of Gelfling against their oppressive overlords, the Skeksis, across more than 50 unique turn-based tactics RPG battles. Along the way, you will recruit and customize new allies by assigning them jobs, modifying their abilities, and outfitting them with equipment to ensure victory. With 14 playable characters, including familiar faces from the classic film and the new Netflix Original series, build your own teams and devise winning strategies to overthrow the rule of the Skeksis and restore light to the Gelfling homeworld of Thra! A Twisted Fairy Tale Full of mystical creatures from faraway lands, experience an expansive fantasy story through the vibrant world of Thra, where innocent Gelfling lives are consumed for their essence by the nefarious Skeksis. Unite the Gelfling tribes and drive the rebellion to success, or defeat… Strategic Tactical Battles Decades of developer experience building strategy games brings multi-layered, tactical role-playing game combat. Units can be customized for specific fights with unique gear and varied abilities across an expansive job system. Use guile, planning, and cunning to overcome superior foes. Dynamic Environments Thra is full of unpredictable environments, from arid deserts to lush forests, as dangerous as they are beautiful. Dynamic events on the battlefield may create opportunities or pose additional complications, necessitating rapid changes in strategy.

With over 50 missions across Thra’s seven regions, players of DC: AoR Tactics will need to consider strategies that use each environment to their advantage. Take care to factor them into planning each turn.

Related:
Xbox Insider Release Notes – Delta and Omega Ring (2002.200131-2000)
Six Reasons to Pick Up Zombie Army 4 Today on Xbox One
Welcome to the Next Chapter of Xbox Game Pass Quests