Disable the NSFW warnings that refer to content considered inappropriate in the workplace (Not Suitable For Work).

Switch to the dark mode that's kinder on your eyes at night time.

Switch to the light mode that's kinder on your eyes at day time.

Disable the NSFW warnings that refer to content considered inappropriate in the workplace (Not Suitable For Work).

Switch to the dark mode that's kinder on your eyes at night time.

Switch to the light mode that's kinder on your eyes at day time. 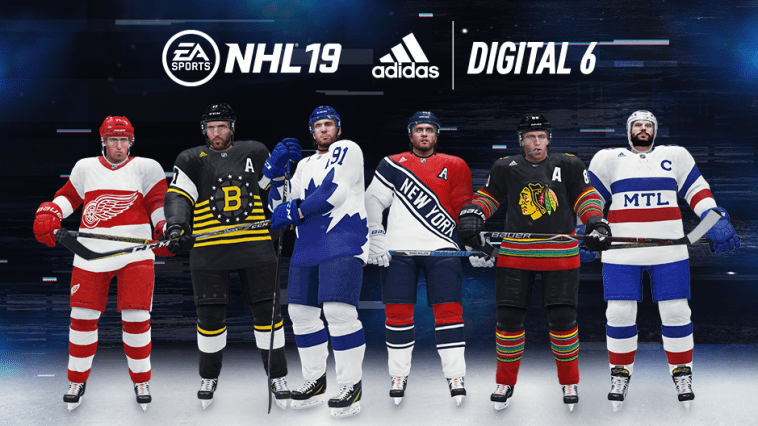 EA Sports NHL 19 and adidas have teamed up to create something special for hockey fans, with unique Digital 6 jerseys being introduced in-game. Methodically created to honor the Original Six NHL teams, these designs are fashioned with the history of each city in mind. Learn more about each of these innovative jersey designs below and how to get them first in-game.

With the fighting spirit of a bear and a storied history that has defined their legacy, the Digital 6 jersey for the Boston Bruins pays homage to the league’s first American team. The seven stripes and 13 stars surrounding their prominent logo represents the country’s original 13 colonies, honoring the birthplace of a nation. The white color-blocking on the sleeves makes each player’s number pop, and innovative body striping is exclusive to this jersey. Unleash the attitude of a Bruin with this bold jersey in NHL 19.

Our first reaction to the Blackhawks’ Digital 6 jersey was a mix of wonder and awe, as the seven colors from their logo have been expanded to various areas of this design. No logo in professional sports features as many shades as Chicago’s jersey, which is why this design is so vibrant and powerful. Their iconic jersey crest color palette was expanded out onto the sleeves with bold striping that stays true to their legacy. The threads weaved into the striped pattern on the Blackhawks jersey give it a classic appearance, too, perfect for showing off in NHL 19.

The bold red and white stripes on the Red Wings jersey are inspired by Detroit’s automotive history, adorned with the kind of racing stripes that decorated many local muscle cars. This fresh take on the 1926-1927 jersey features an amped-up Red Wings logo front and center. Seize control of an attitude forged in the heart of Hockeytown with this incredible Red Wings sweater.

Montreal’s jersey celebrates the city’s francophone roots in a way that’s never been seen. Bringing together the traditional color scheme of Bleu, Blanc, and Rouge, this jersey pops with originality thanks to a number of special design choices that went into creating this look. The MTL abbreviation is a nod to how the locals refer to their city, surrounded by vivid striping and the iconic C from their crest used as the captaincy C. Vive les Habitants!

The Big Apple is grand and larger than life, which is why the Rangers’ jersey features an oversized crest with New York emphasized as the center of attention. Bearing the revered Rangers shield and wrapping it all the way around their jersey creates a balanced look between Home and Away designs with a striking presence. Stand like skyscrapers above the competition with the Rangers’ Digital 6 design in NHL 19.

Blending the Maple Leafs logo with the Team Canada Summit Series jersey from 1972, this jersey makes each player look like a singular flying leaf. The untouched white area in the upper half of the jersey, combined with the frosted blue visor, pay homage to the winter cityscape when the ice has frozen over. Represent Toronto with this beautiful design.

The Digital 6 jerseys will be available first in Hockey Ultimate Team (HUT) on November 5 before coming to more modes on November 19. You can acquire the Digital 6 in HUT in the following ways:

That’s all Xbox fans. We can’t wait to see you and your team out on the ice in these incredible new jerseys! NHL 19 is available now for Xbox One on the Microsoft Store.

Browse and manage your votes from your Member Profile Page

Buy Me a Coffee

Thank you for the Support!